What to visit in Lake Garda in Italy and what is the best time for that? Where to visit with children, interesting facts and photos.

Lake Garda is one of the central attractions of Italy and Europe in general. One of those places that everyone needs to visit at least once in their life.

Moreover, it is quite simple to do this. After all, Lake Garda is located in northern Italy about halfway between Verona and Brescia. And it can be easily reached by public transport from Milan or Venice.

The Garda is 152 kilometers long and less than 17 kilometers in the widest part. The area of the reservoir is something about 2,350 km2. Which makes Garda the largest lake in Italy.

The climate on the shores of Lake Garda, despite its glacial origin, is extremely mild. But it is still surprising to see the blooming citrus trees against the background of the harsh Alpine foothills.

This positive natural anomaly, an oasis in northern Italy, has been the reason for the popularity of the lake in the eyes of powerful and simply rich people since ancient times.

Even in the days of ancient Rome, there were patrician villas here. Today, every well-off person strives to acquire real estate on the shores of the lake. 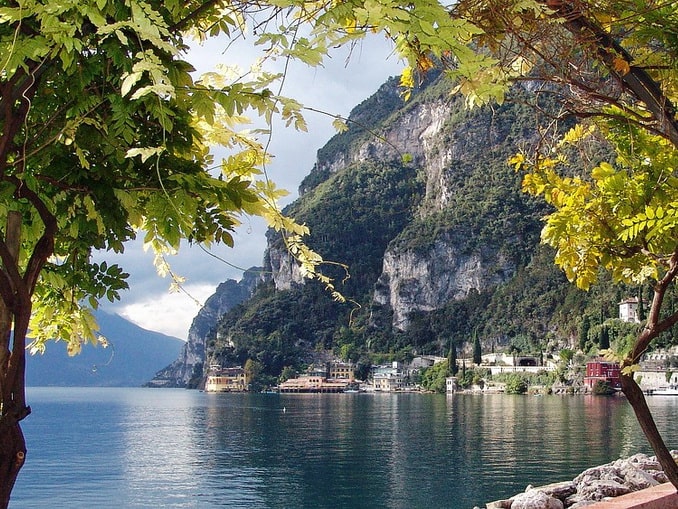 In May, it is not hot here: up to +23-25 °C with a consistently high precipitation rate. Sunny days, however, are enough, which attracts those who want to sunbathe to the shores of the lake.

Bathing in a pond at the end of spring will not appeal to everyone – the water is invigorating. But boat trips and yachts are extremely in demand. As well as heated swimming pools at local hotels and villas.

In June it gets hot, although precipitation does not stop at all. Equally very sultry weather is here in July and August – the air temperature rises to +30-32 °C.

But in September, the air over the lake gradually cools down, preparing for the off-season. And this time is especially in demand among those tourists who do not tolerate hot weather.

The northern end of the lake is narrow. But the southern one, adjacent to the motorway between Verona and Brescia, on the contrary, is wide. And it is here, on a narrow peninsula that cuts far into the lake surface, that the ancient town of Sirmione is located. Considered the de facto capital of the region and the main attraction of Lake Garda.

In particular, the greatest ancient Roman poets, Virgil and Catullus, drew inspiration here. The latter was vacationing at the family villa and repeatedly praised the beauty of Garda in his works.

The Scaligerian family castle has been perfectly preserved in Sirmione. The family tombs of a number of representatives of the family – the Scaliger Arches – are the top attraction of  Verona. 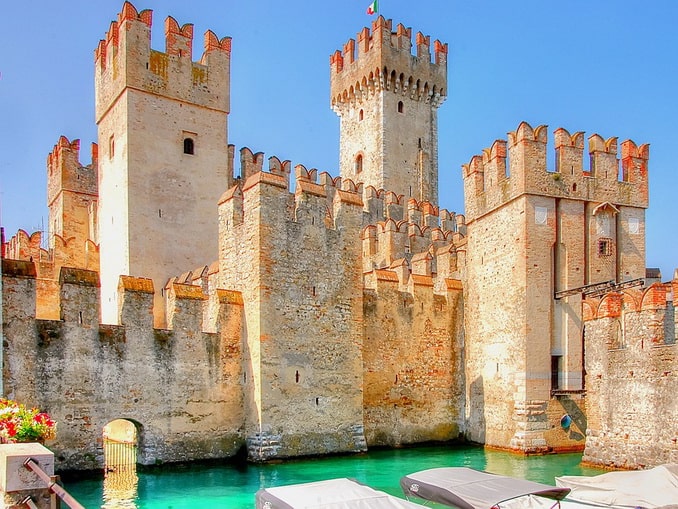 You can go inside the castle in Sirmione any day except Monday. There are usually a lot of tourists, but the views from the walls and towers 47 meters high are worth the work. The entrance ticket will cost but it costs quite a bit (6 6): museilombardia.cultura.gov.it/en/museums/rocca-scaligera-di-sirmione/.

In the Middle Ages, noble families from Verona also rested in Sirmione. Surely Juliet, if she existed in reality, would like to relax on Lake Garda.

Family villas have been preserved, but you will be allowed there only at the invitation of the owners. What should not upset the tourist – there are plenty of hotels with excellent service and views from the windows.

Wonderful panoramas open from the rooms and halls of the Hotel Eden. And the Hotel Porto Azzurro, which is slightly inferior to it in this sense, takes in silence, a huge swimming pool and delicious breakfasts.

You can easily get to Sirmione from Milan. Take the train to Desenzano del Garda station, get off and go to the port. There you buy a ferry ticket and sail. Enjoying the beauties along the way!

On the west coast of the lake there is the resort town Salo – it has been famous since Roman times. Here, as well as in the Gardona Riviera a little to the north, representatives of the European cultural bohemia in the XIX-XX centuries liked to relax and even settle.

The towns of Tignale and Tremosine are less well-known, but popular to this day. Surely you will also enjoy the views in located exactly at the northern tip of the lake, Riva del Garda.

On the eastern shore of the Garda is the town of Malcesine. Where you can not only have a great swim, but also climb Monte Baldo (2,218 meters). From the mountain it seems that the whole lake can fit in the palm of your hand.

The Scaligerian castle of the XIII century, which is inevitable for this area, is beautiful and towering over the town.

The ferry from Siomione to Malcesine takes about 3 hours, from the pier in 15-20 minutes you can walk to the lower station of the funicular. We look at its opening hours and ticket prices here – funiviedelbaldo.it/en/timetable-rates/. 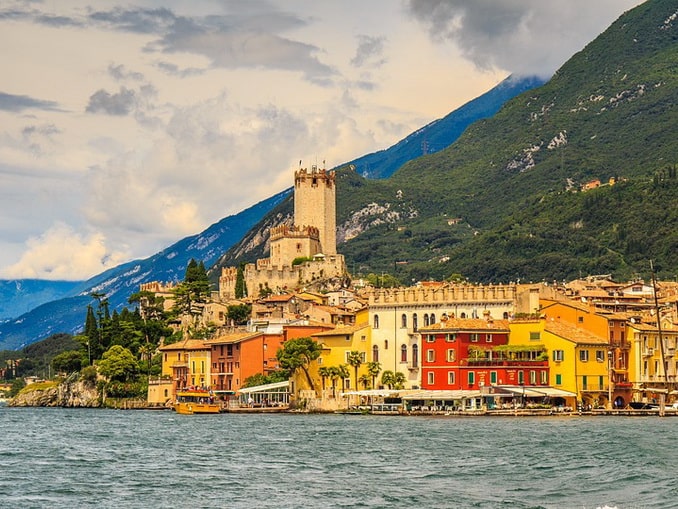 Not far from Sirmione there is a huge theme park Gardaland. The largest institution of its kind in Italy and one of the largest in Europe. It is in order to visit Gardaland that families with children often go to Lake Garda.

The park is located just 2 kilometers from the town of Peschiera del Garda, through which the Milan-Venice railway line passes.

Gardaland is only about 5 minutes away from the train station by free bus.

The prices for tickets to the park, however, are quite high. By becoming a participant in early booking, you will get a significant discount on accommodation in a local hotel and entertainment.

The children will be happy, because the park has everything necessary for a fun pastime. There are a lot of attractions, themed mini-excursions, entertaining jousting tournaments, there is even a show with dolphins!