Las Médulas in Spain – how to get to in 2023 and why? Description, where is it, history, best time to go, photos.

Among knowledgeable people Las Médulas is considered one of the most remarkable sights of Spain. The town with this name is located in the region El Bierzo near Ponferrada in the province of Leon. And next to it is situated an abandoned gold mine – as ancient authors testify – the largest in the Roman Empire.

It seems to be nothing special?! But in fact, it is definitely worth coming here at least after you visit all famous places of Madrid and see Barcelona.

Because Las Médulas is definitely worth seeing in person! As the beauty of the area is Fascinating, deserving of the movie “Avatar”. Visually it looks
like really golden mountains covered with a green carpet of forests – this is not found every day, is it?

Upon closer inspection, it turns out that the mountains are pitted with a system of tunnels and mines. The scale of which suggests that ancient giants, not ordinary people, worked on their creation.

Archaeologists claim that the Romans first used advanced methods of hydraulic destruction and rock washing here for gold mining. Which allowed us to achieve industrial production volumes, and left an unusual, not quite terrestrial relief for descendants. However, were they Romans?

The distance from Madrid to Las Médulas by highway is about 410 km. The easiest way to get to it is by car – through Avila.

From Ponferrada, which is located 22 km northeast, you should follow the N-536 highway. Don’t rely on regional buses, so as not to get into a mess. Since some routes go to the place, but it is not possible to say for sure.

You may ask, what is Ponferrada? And I will answer that this is a fairly large city with a population of about 70 thousand people. And it is located west of Leon (AR-71) between Astorga and Lugo (highway A-6). 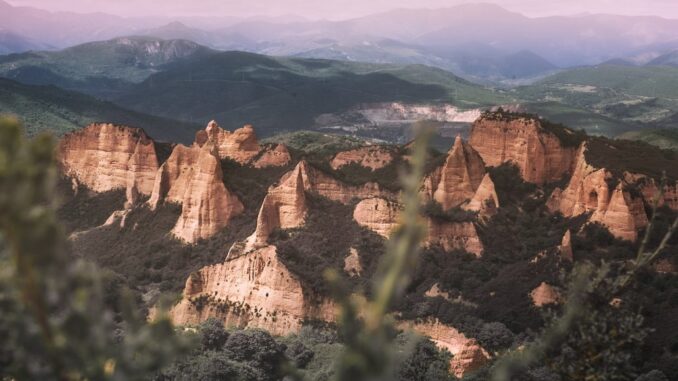 For two centuries at the dawn of our era, from the 1st to the 3rd century, the extraction of gold from the ground continued in Las Médulas. And then the mines became impoverished and were abandoned.

They say that 5-6 thousand tons of precious metal were mined here a year, which was then used for hiking, bribes, villas. As well as the construction and reconstruction of buildings and structures, which today are considered the top attractions of Rome. Why, this golden streamlet caused the appearance of entire cities like Nimes.

The study of the area by modern scientists has given mankind a huge amount of information about the mining industry of ancient Rome. And, in principle, the engineering capabilities of the ancient empire.

According to the results of scientific research, Las Médulas were awarded inclusion in the list of UNESCO protected sites – whc.unesco.org/en/list/803/. And all the new portions of travelers – albeit a few – take full advantage of the opportunity to immerse themselves in the past without falling out of the present.

In the center of the protected area there are relatively small hills and extensive caves: Cueva Encantada and Cuevona. Those who like to see all this splendor from a distance will have to climb to the Mirador de Orellan observatory site at an altitude of approximately 800 meters, from where a stunning view opens.

In any case, to see the sights, you will have to work hard and stock up on certain tourist equipment. Like mountain boots, backpacks and a fair amount of water.

After all, the length of the routes ranges from 3 to 11 km. That in an elevated area and at temperatures exceeding +30 degrees Celsius, it can turn out to be an unbearable entertainment.

So as you understand, it is better to visit Las Médulas like Madrid in May. Well, or even earlier or, conversely, in the mature autumn. Because in summer and even in early September, climbing exercises in this area will not benefit your body.