Phi Phi Islands in Thailand: how to get there and what to do? Description, where are they located, best time to go? Plus photos and practical tips.

The Phi Phi Archipelago off the coast of Thailand until relatively recently was a typical lost corner on the world map. Incredibly beautiful tropical islands, the most delicious paradise, which the tourist operators tell you about in secret. Only if in their eyes you will look like a sufficiently wealthy client.

But today, alas, this islands have turned into a fairly popular tourist destination. Although, of course, they didn’t completely lost all their charm.

The Phi Phi Islands are located in the Andaman Sea, between Phuket Island and the Malay Peninsula. The archipelago consists of two relatively large islands, Ko Phi Phi Don and Ko Phi Phi Le. And a mass of small ones, which are just limestone rocks overgrown with tropical forest. 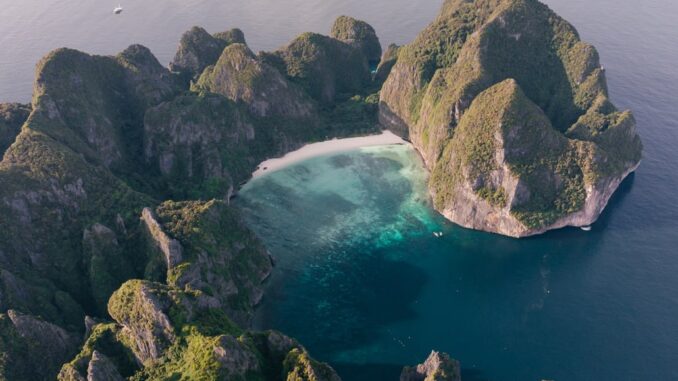 How to Get to Phi Phi

You can get to the popular islands both from Phuket and from another popular Thai resort – Krabi. The route is served by large boats, which are called here ferries.

In Phuket, ships depart from the Seedlings Pier in the capital. The journey will take 2 hours in one direction. A ticket purchased directly at the pier costs more than the one that will be purchased online or in travel agencies.

You need to buy tickets 5-7 days before the expected date of the trip. Since they are usually not available for tomorrow.

You can get from Krabi from several berths, combined tickets for land transfer and boat are also available. The journey only by sea will last about 1.5 hours.

Fans of the “beautiful life” can hire a personal boat. That’s just the program of sightseeing and the time of departure will be determined not by you, but by the captain of the ship. Or its owners.

When is it better to go to the Phi Phi Islands? At the same time, when and in principle to go for a vacation in Thailand!

That is, in the period from the end of December to the beginning of April. The rains at this time do not so affect the nerves, and the unbearable heat subsides.

The current weather forecast for the next 14 days you will find here – timeanddate.com/weather/@1119405/ext.

Most tourists come to Phi Phi for just 1 day. To admire the green rocks growing out of the sea, splash in the amazingly clear water and lie on the blanket beaches, which are not so many in the world.

Phi Phi Lei is visited by day travelers. Arriving by boat from Phuket with almost the sole purpose of taking a selfie against the backdrop of an impressive landscape and swimming a couple of times.

The iconic landmark of the island is the Viking Cave, on the walls of which rock carvings of ships have been found. They are, however, not painted by cavemen! Experts attribute them to the time of arrival of Portuguese navigators in these region.

On the largest island of the archipelago, Phi Phi Don, with an area of 28 km2, a much more significant tourist infrastructure has been created. Including hotels and separate bungalows for tourists to stay.

There is also a rental of equipment for snorkeling and diving, which are especially beautiful in these waters.

A significant attraction of Phi Phi Don is Monkey Beach. There are really a lot of macaques on the shore. And over the years, they have become so arrogant that tourists should be afraid of them, not feed. 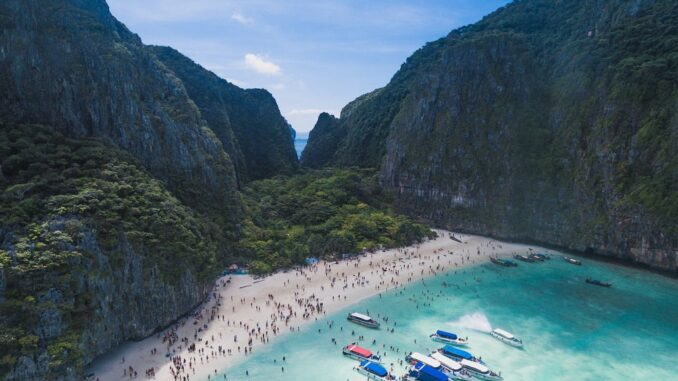 The Birth of a Legend

Hollywood screenwriters who were looking for a nature to shoot a film based on Alex Garland’s book “The Beach” chose the Phi Phi Islands, located between mainland Thailand and Phuket Island. Although in the original version, the action takes place on Koh Tao in the Gulf of Thailand, not far from Koh Samui.

For filming a movie, which was released in 2000 and paid off its budget three times, the second largest island, Phi Phi Lei, was turned into a kind of earthly paradise. To do this, cinematographers had to thoroughly work on the virgin nature: cut down part of the coconut palms and expand the beach.

The beauty and emerald waters of Maya Bay, as well as the youthful spontaneity of the future world cinema idol Leonardo DiCaprio delighted the audience. And thousands of tourists flocked to the islands. That is, today there are already hundreds of thousands…