Etretat in France: description, location, photos. How to get from Paris on your own, when is it better to go to the cliffs of Etretat?

The small seaside town Etretat in Normandy on the shores of the English Channel is one of the most beautiful places in France and in Europe in general. And for this reason it is a popular tourist attraction.

Limestone cliffs and arches near Etretat, as if cut by nature in stone, have long attracted lovers of beauty. In particular, impressionists loved to draw them.

Famous Claude Monet and Gustave Courbet often came to this shore to catch inspiration. Their frank admiration, as well as alluring, light-filled paintings attracted the attention of connoisseurs. Thus marking the beginning of Etretat’s wide fame.

Sunrise and sunrise, fishing boats near the coast and similar uncomplicated subjects were captured on canvases dozens of times. Which clearly shows that if people who knew a lot about impressions appreciated the coastal cliffs of Etretat in Normandy so much, then modern travelers should also visit here.

Maybe not for sketches – today there will be enough photos on your smartphone. And you can bring a lot of souvenirs with views of Etretat from France: magnets, plates, shirts…

It should be noted that the fishing town itself, from where views open and walks along the coast start, is literally imbued with a special, French, charm. Which can be felt only in the provinces – not in Paris! 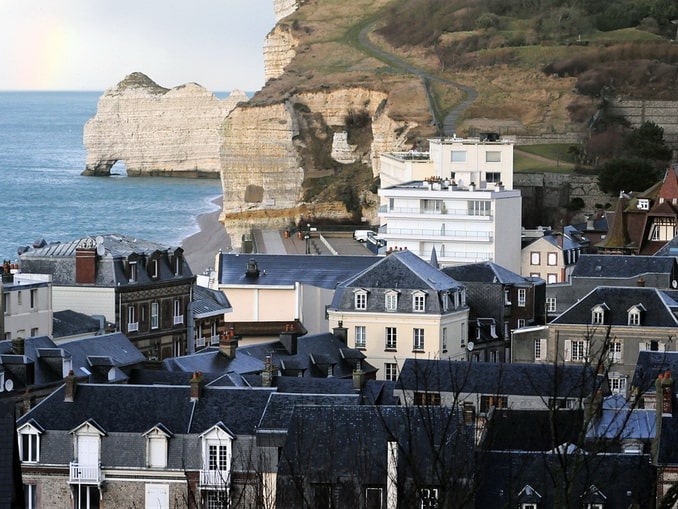 It is rarely hot in Etretat even in summer: the air temperature does not rise +28-30 °C in July and August. In addition, according to long-term statistics, this is the driest time on the Normandy coast. Therefore, it is during this period that it is best to come here for artistic photos.

But if you need to come to your senses, be alone with nature, look into the distance, then it’s better to come to Etretat in the fall. You visited Paris in October – go to Normandy for a couple of days, you won’t regret it.

Fortunately, even late autumn is quite mild here – and by All Saints’ Day, lovers of seaside walks have the right to count on +12-15. And besides, at this time you can see a real powerful storm here.

Winter on the coast of Normandy is also not too severe – frosts practically do not happen here. But it is necessary to take into account the high humidity of the area and frequent precipitation. The maximum of which falls on the final of autumn and the beginning of winter.

Etretat is located in Upper Normandy, between the cities of Le Havre and Fecan. And you can get to the place from Paris (the distance is 185 km by highway) in several ways at once. This is if you do not consider the simplest – by buying an excursion tour. 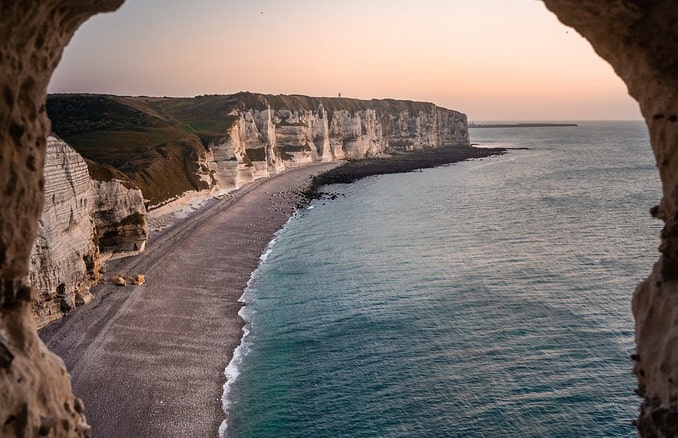 You can take a Flixbus bus directly from Paris. It departs from the station Bercy Seine twice a day, and overcomes the road to Etretat for a maximum of 4.5 hours. The schedule and prices can be found here – global.flixbus.com/bus-routes/bus-paris-etretat.

You can also get to Etretat with a transfer. First by train from Gare Saint-Lazare to Le Havre or Fecan. And then transfer to a regular bus. It is preferable to go to Fekan, since the ticket is cheaper.